I am excited to announce that I have been invited to speak at the forthcoming Equestrian History Conference at Cal-Poly Pomona, November 2019. My paper is entitled: ‘Most Frightful People’ – How Mules Earned their Names in The Great War’. I am particularly looking forward to meeting Sandra Swart, Professor of History at Stellenbosch University, and author of Riding High: Horses, Humans and History in South Africa, Wits University Press, 2010.

This week I am guest writer on Eland Lodge Equestrian’s new blog site. Eland are marking the centenary of the signing of the Treaty of Versailles – June 28th 2019 – with my short piece about war horses.

“On 4th August 1914 Britain declared war on Germany. The British Army of 1914 was the most mechanised of all the army’s involved, but it still needed horses – and this demand only increased as the War progressed. When war was declared, the British Army immediately set about mobilizing its equine resources.”

Where would we be without our Horses?

Today I thought I’d share this link to the BBC’s brilliant TV series The Queen’s Cavalry. I heartily recommend watching the entire episode – and indeed the whole series. I’ve recently been writing about recruits’ experiences of learning to ride in the Army Riding Schools during The Great War, and was struck (not for the first time) by how similar these modern soldiers’ experiences are to those of men over one hundred years ago.  From the Riding Instructor Sergeant’s brilliant observations: “Are you sure that’s the right way round?” To the quite literal ‘ups and downs’ of Riding School. Absolutely brilliant. A reminder that horses are certainly not ‘hairy motorbikes’ (to quote myself!) and that learning to ride is not easy.

USDA National Agricultural Library hold resources that might be of interest to equine historians with a broader interest in US history and agricultural history. They offer a database for government documents in Agricola, an assortment of Digital Collections, and even an internship program. Man O’ War Photograph Collection Collection Number: 297 Linear Feet: 1.25 Collection Description: […]

It’s all happening here at SenseandSentimentality.com!

After moving house just before Christmas, I’ve been making up for lost time on Soldiers and their Horses. I’m happy to report that we’re now on chapter four – of five. Permissions for images and written content are pretty much sorted out too. So, deadline of October 1st for submission of manuscript is looking good. Fingers crossed!

Other brilliant news is that I will be publishing a chapter in, Artistic Expressions and The Great War: One Hundred Years On. The editor is Dr. Sally D. Charnow, Professor of History at Hofstra University, New York. It will be published by Peter Lang in 2020 as part of their ‘Cultural Memories’ series. This publication comes out of the conference by the same name held at Hofstra in November last year.

And…only two weeks until Maritime Animals, Telling Stories of Animals at Sea at The National Maritime Museum in London! Horses are now scheduled for the last day (Saturday 27th April) of the conference, with Professor William Gervase Clarence-Smith as our guest speaker. Day tickets are available!

“A Weapon in the Hands of the Allies” Transporting British Army Horses and Mules during The Great War.

In April I am excited to be presenting a paper at the Maritime Animals: Telling Stories of Animals at Sea conference, to be held at The National Maritime Museum, London. More details about what promises to be a very interesting conference can be found here:

“A Weapon in the Hands of the Allies”: Transporting British Army Horses and Mules during The Great War.

Between 1914 and 1918 The British Army transported by sea over one million horses and mules from around the Globe to every theatre of The Great War. The horses and mules were purchased in the United Kingdom, North America, Canada, South America, South Africa and China. Yet more accompanied the forces of Australia and New Zealand to Egypt and the Indian divisions of the British Army to France. Every horse and mule represented a considerable financial investment; it being estimated that a total £67.5 million was spent on their purchase, training, and delivery between 1914 and 1918. Each of these thousands of horses and mules was also vital to the war effort. It was essential that this precious cargo be protected from avoidable harm.

It is credit to the personnel involved that this expensive living ‘weapon’ was successfully shipped, over great distances, in such numbers, and with such a high degree of success. In addition, astutely devised military regulations ensured that losses were minimised. First-hand accounts enable us to examine how, and how successfully, these Army regulations were implemented. At the War’s end, and when the authorities involved were allowed time to look back on their achievements, it became clear that this command of the world’s horse and mule supply had been a decisive factor in the War’s outcome. The horse and mule were, indeed, ‘a weapon in the hands of the allies’.

Artillery horses aboard the transport ship ‘Mashobra’ in 1915.

Exciting news! I am now working with Routledge on my book Soldiers and their Horses: Sense, Sentimentality and the Soldier-Horse Relationship in The Great War. It is going to be published in Routledge’s ‘Studies in Cultural History’ series.

Here is a taster of what Soldiers and their Horses is all about!

“The soldier-horse relationship was a working partnership, nurtured by The British Army because it made the soldier and his horse into an effective fighting unit. Working and living alongside one another in difficult and dangerous conditions, soldiers came to rely on their horses and their horses in them. Soldiers and their Horses explores a complex relationship between horse and human, made all the more fraught because of the extreme conditions in which it existed.

Soldiers and their Horses reconciles the hard pragmatism of war with the emotional and the imaginative. It is both a social history of Britain in the early twentieth century and a history of the British Army. By carefully overlapping the civilian and the military, and juxtaposing institutional policy and individual experience, this book provides a valuable contribution to current thinking about the complexity of human-animal relationships.”

In November, Hofstra University will be hosting the ‘Artistic Expressions and The Great War: A Hundred Years On’ conference at Hempstead, New York. I am excited to be presenting a paper on portrayals of the soldier and his horse in the British illustrated press.

More information about the conference can be found here:

Portrayals of the Soldier and his Horse in The War Illustrated, 1914 to 1918.

Publications like The War Illustrated brought news of The Great War into the home. The war illustrators provided visually entertaining images of major battles, of acts of heroism and of moments of drama and pathos. Increasingly, however, photographs were also used and, while it was not yet possible to take cameras into the thick of the action, photographers did capture something of what life on active service was like for the soldier.

Photographs and images of the soldier and his horse also allowed the British public to imagine war. For example, images of the soldier’s care for his horse provided reassurance and comfort, because they implied that he had not been de-humanised by war and that his capacity for compassion and kindness survived. The horse was a safe medium through which to safely portray the aftermath of battle and to deal with difficult subjects such as death and wounding. Conversely, humorous photographs and illustrations of soldiers and their horses also provided opportunities for humour and some much-needed light relief.

This paper considers how portrayals of the soldier and his horse altered as the War progressed and as public feeling shifted; from dramatic scenes of bravery, to the more contemplative mid-war images of 1916 and 1917. The War Illustrated allows us a privileged glimpse into the emotional lives of the British people as they lived through The Great War. 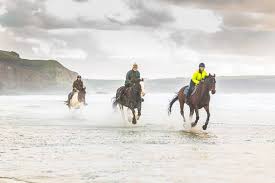 I will be speaking at the second biannual Equine Cultures in Transition conference to be held at Leeds Beckett University on the 19th to 21st June 2018.

Details of the conference can be found here:

“A Kind of Companionship” A Critical Study of the Soldier-Horse Relationship in The Great War.

The British Army’s organisation brought the soldier and horse together solely for the purposes of war. However, a perpetual drive for economy and military efficiency also created an environment where the horse and the soldier were treated far more humanely than they had ever been in the Army’s past. The soldier was expected to always put his horse first, just as an officer was expected to put the needs of his men before his own. A soldier whose own needs were met in terms of rations, equipment, clothing, shelter and medical attention was far more inclined to take good care of his horse. Similarly, a horse that was well managed remained serviceable for longer. Soldiers were encouraged to take an active interest in the welfare of their horses and were given sole responsibility for their well-being. When on active service, soldiers lived and worked alongside their horses; sharing war’s dangers and privations. Many soldiers came to think of their horses as “comrades”.

Call for Coffee Chats and Seminars!